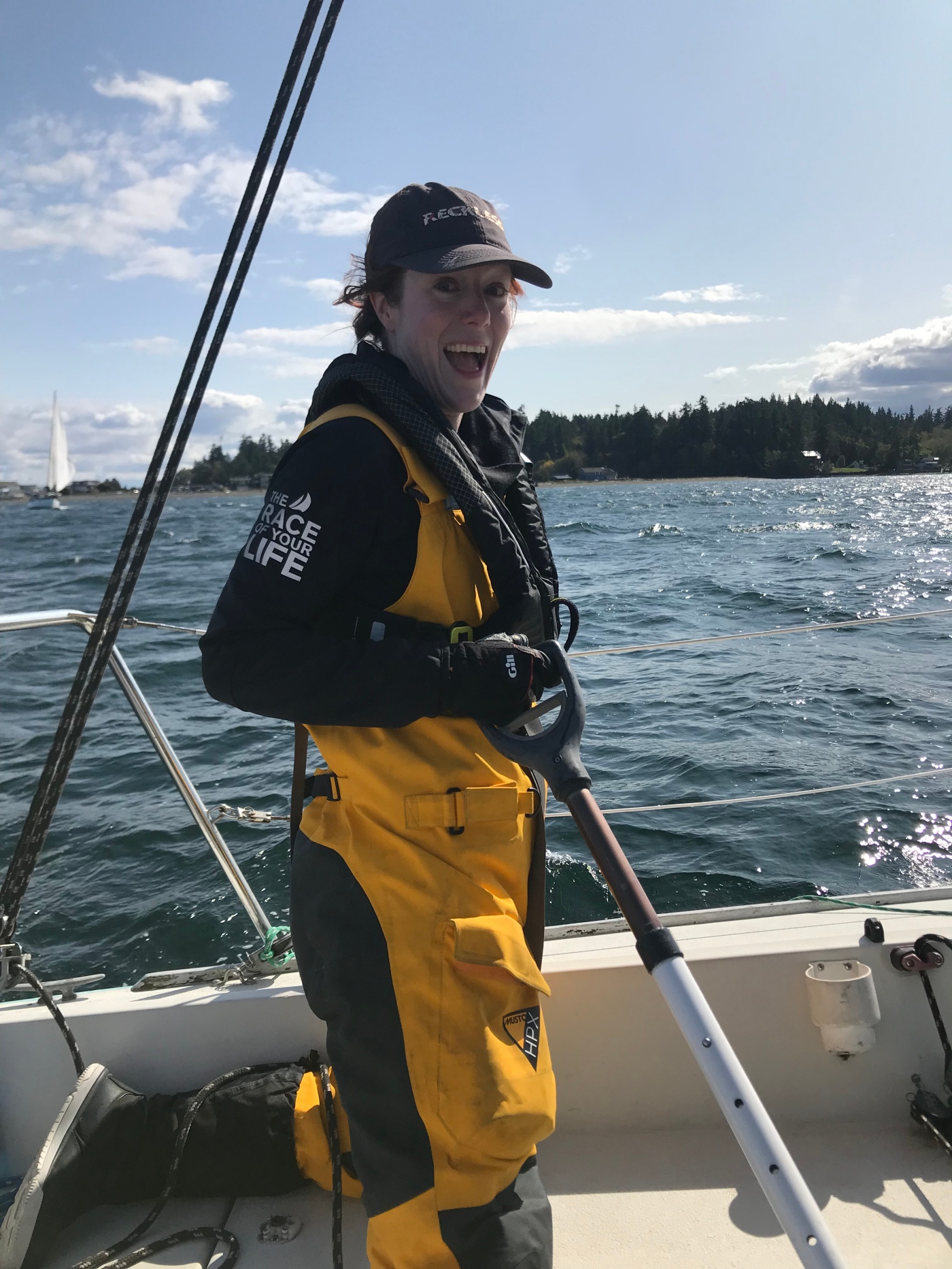 It would seem that the Rum Run continues to be a race that is a special one for me. Those of you who know my saga know that a previous Rum Run, welllll… Rogue Rum Run, was the day I can pinpoint as the day I really fell in love with sailing. It turns out Rum Run 2019 is another special Rum Run! A couple of weeks ago after watching the movie Maiden with dozens of fellow Sloop Tavern Yacht Club I hadn’t yet sorted a ride out for the race so shamelessly asked my friend Mike Danger if he had plans for it. He hadn’t even thought of it yet, but was conveniently sitting next to his friend Duncan and they decided it would be fun to take Duncan’s boat 20 Degrees out! As luck would have it Mike’s partner Nadine was also there. While she doesn’t consider herself a sailor *yet* as soon as I heard him say they haven’t really done a lot of racing together I knew this would be a great opportunity for a gateway race.

As Mike and I continued to chat about plans for the race I knew it was going to be a fun one based on the cast of characters that had been pulled together. The week prior to Rum Run Mike messaged me and asked me my preferred position on the boat. I let him know I love the pointy end but will work pretty much anywhere, and then my heart leaped into my throat as he said that he and Duncan were considering having me take the helm if I wanted it. ACK! Me, helming a race?! So many thoughts went through my head, but I didn’t give it a ton of energy as I wasn’t sure if it would really happen or not.

The morning of the race happened and after excitedly getting to the slip, orienting myself to the boat, a Wylie 34 and doing introductions (“Hi, my name is Lizzy” “Hi Lizzy!” “And I’m a sailor”) we go over roles for the day. Duncan, the boat owner asked me how I would feel about driving and holy crap, it was happening! I’m sure the big grin on my face answered before I could say the words. I had Duncan take us out of the slip (didn’t want to push my luck too much!) and then when we were out and in Shilshole Bay. With admittedly some trepidation, I asked Duncan if he was ready to hand off the tiller. He enthusiastically said yes and holy crap, I was now skipper!

Before the race start there wasn’t much wind, in fact we saw the sad eyeballs (0.0) on the speed indicator. Truth be told I was more than ok with this as it gave me more time to try to get my bearings. This proved difficult as the wind was being incredibly flukey and the windex kept swinging around so I couldn’t easily pick a course to stay to and find a setting I liked for the sails! It did mean lots of opportunities to practice calling gybes and tacks with the changing wind direction. After a delay due to waiting for the committee boat to make it through the locks it was time for the race start, AHHH!! Again, fortunately the winds were still pretty calm so the start was in slow motion. Minus one boat that yelled at us as they seem to have forgotten this is meant to be a casual race, the start went reasonably well. I picked a spot to stay in and wanted to be conservative so waited until after the start to hoist our spinnaker. After a couple of minutes the racer in me won out over the anxious person in me so the awesome team on the boat got the kite up and the jib furled in. All went well and THANK GOD the wind filled in a bit and stayed fairly steady so I could get a course and sail towards the first mark. Holy crap, I was doing it! I had helmed for my first race start and we didn’t crash into anybody, and now I was steering towards my first mark and picking our lines. It was incredible. The next mark rounding went fairly uneventfully, though again I was very conservative on calling the timing for the douse so we went way past the mark in order to drop the kite before rounding. Oops! Something I’ll definitely get better at as time goes on. The wind started to fill in a little bit more after rounding the West Point mark and I continued to get the feel for the boat. I started to get to know the sweet spot where I felt even pressure on both sides of the rudder and could tell she was happy. I looked around a little bit to see where other boats were but couldn’t spend much time doing it, I realized now why the skippers I’ve sailed with kept asking me to watch for other boats when I was trimming as it’s really a big job to keep focusing on where I’m driving and what the wind and telltales are doing. Skippers I love, if you’re reading this I promise I’ll be even more diligent about calling traffic and other hazards for you!

Because this was my first time helming a race, it couldn’t go completely without some oopsies and boy did they. Anyone who sails in Shilshole Bay knows that there are a couple of areas in particular where the water can be deceptively shallow. West Point is one such area, and having gone aground there spectacularly earlier in the year on another vessel (not my fault!!) I gave the beach a wide berth and we tacked away early and avoided any mishaps. As we were nearing the point I figured we should start turning soon I asked the guys what they thought about the tack angle and Mike smiled back and said “You’re the skipper!” Well… Meadow Point is a mark I’m used rounding on a boat with a shallower draft (my beloved Reckless, a J/80) and cut it a little too close before turning towards the mark. We didn’t have a working depth sounder on 20 Degrees and so there was a very soft lurch and we stopped moving and, crap, I had put us aground. Fortunately it was over in a matter of minutes as it was a soft grounding, the engine is solid, and we were able to throw the boom over to weight us. After some work moving the rudder back and forth and a few choice swears we wiggled ourself off of where we grounded and starting moving towards the mark by way of a few tacks. I was embarrassed and apologizing profusely to Duncan for my error and in my head hoping I hadn’t damaged the keel. Because I wasn’t focusing on where I was steering and what the wind and currents were doing, I managed to put us into irons (a point of sail where you don’t have forward momentum or much steerage at all) and the current was all too happy to push us into the Meadow Point buoy. Oops.
Not my finest 15 minutes of my sailing career for sure, and thanks to fellow rad lady sailor Remy on board we were able to avoid a harder bonk as she did a great job of fending us off. At this point Nadine could tell I was mentally beating myself up and encouraged me which I was very grateful for.

The wind continued to kick in and it made for quite a fun run to Port Madison. It was revealed that the boat is named 20 Degrees because that is an angle that she sails quite happily at, and I have to agree! There were a few gusts and I think a couple of the crew were more than a little nervous at the angle we were at (sorry Amy!) as this was a new concept. Fortunately I had the awesome team of Mike and Remy trimming and they helped get the boat a little flatter so that there were no crazy broaches or round ups. We sailed past the invisible finish line and while we didn’t earn one of the coveted duck stickers, holy crap I had done it! I skippered a race!! My nervous instinct wanted to get the sails furled right away and throw the motor on, but then brain reminded me that other boats were finishing behind us (yay we weren’t dead last!!) and turning up into the wind just past the finish line would be bad form. We continued to motor sail into Port Madison and then I handed off the tiller to Duncan to get us into the raft up.

The raft up was fun and it was great to see dear friends in the community. A few expressed how proud they were that I skippered and I was grateful for it! I may or may not have had more than a couple of rum drinks to calm the nerves that finally got to get worked out about skippering so definitely did not do any of the driving home!!

Mike and Duncan, thank you SO MUCH for believing in me and entrusting me with the privilege of skippering. Thank you for providing a safe place to learn and make mistakes, and for encouraging me to make calls and experiment with the boat. Thanks for not yelling at me when I ran aground and then bonked the buoy, you would have had every right to take the helm away during the race but you told me to keep going and I feel like I grew so much as a sailor because of it. Remy, thank you for always being a badass and an all around fun woman to sail with. You may not know it but you have inspired me to go whole hog with sailing! Nadine and Amy, you both were awesome on the boat. Thank you for doing a great job of staying on the boat in conditions that were definitely not in the Jimmy Buffet video!